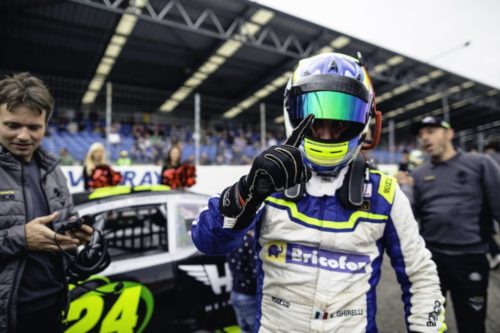 Vittorio Ghirelli just became not only a NASCAR Whelen Euro Series winner but also an oval racing winner. The Italian won a nail-biting battle against Myatt Snider in the closing stages of ELITE 2 Round 9 to grab his maiden NASCAR victory.

Ghirelli built himself a solid lead in the first half of the race, but Snider chased him down as the laps were winding down and the two engaged in a spectacular bumper-to-bumper battle with 10 to go. The Rome-native held on to the lead and brought home the sixth PK Carsport win at Venray.

“I’m so happy to win here, because we put a lot of work in the car,” said Ghirelli, who also won the Rookie Trophy classification. “I had a big lead on the chasing group but in the closing laps I lost a lot of time while lapping other cars. It’s great that we made it in the end! Let’s keep this momentum in the playoffs!”

Snider had a tough start behind polesitter Giorgio Maggi. The Swiss spun his wheels at the start of the race and lost several positions. Snider was stuck behind the Hendriks Motorsport driver and found himself in the middle of the pack.

The 2018 NASCAR Gander Outdoors Truck Series Rookie of the Year fought his way back and when he took second, he rapidly closed the gap separating him from the leader. Despite several attempts and even a slight touch between the two cars, in the end he had to settle for second behind Ghirelli both in the overall classification and in the Rookie Trophy.

“It was a great race, but Vittorio managed to open a big gap, while I was battling in the pack with several drivers,” said Snider. “I closed the gap and tried to make a clean pass, as there are no bump and runs in Europe. It was a great race overall and congratulations are due to Vittorio. I really wanted to win. An oval win for an European driver is more important than for me, but I’m a racer and I also wanted to win.”

Local hero Barry Maessen returned to the podium for the first time since 2016 by finishing third. The Dutchman took advantage of his deep knowledge of Raceway Venray and a great #11 PK Carsport Chevrolet Camaro. Andre Castro ended up fourth in his first ever oval race at the wheel of the #46 Marko Stipp Motorsport Chevrolet Camaro.

Points leader Giorgio Maggi rounded out the top-5 with another solid performance, despite enduring a tough start of the race. The Swiss driver limited damage in his #50 Hendriks Motorsport Ford Mustang and will enter the NWES playoffs leading the ELITE 2 championship standings by nine points over Ghirelli.

Nicholas Risitano was seventh in his #8 Racers Motorsport Chevrolet Camaro ahead of Lasse Soerensen. Despite being in the lead group in the first part of the race, the Dexwet-df1 Racing driver couldn’t continue his streak of six consecutive podium finishes in 2019 at Raceway Venray but grabbed important points for his championship ambitions.

Jesse Vartiainen, Pierluigi Veronesi and Michael Bleekemolen rounded out the top-10. The 69-year old Dutchman grabbed the Legend Trophy win by finishing tenth in the overall race standings. Justin Kunz was eleventh ahead of Simone Laureti.

On Sunday the ELITE 1 Division will be back in action. Qualifying and the 100-lap long ELITE 1 Round 9 will be streamed live on Fanschoice.tv, the Euro NASCAR Facebook page and YouTube channel, Motorsport.tv and a vast network of social media pages and websites from around the world.